Thanksgiving always conjures up the past: My large family of six children, each sneaking alternately into the kitchen to satisfy a craving before dinner; sweet mini-marshmallows awaiting their place on a pan of sweet potatoes; a slice of American “peel” cheese to satisfy a hungry stomach; a triangle of sugar and cinnamon pie crust leftover from an apple pie; a swipe of frosting from the annual birthday cake that became a part of our festivities.

I not only cooked Thanksgiving dinner for family and friends, but we had a birthday party in the late afternoon. There was a turkey cake, a train or animal cake, depending on what Chris, the birthday-boy, had requested. One year there were even pilgrim hats and collars for both adults and children.

The lively celebration helped to fill the empty spaces caused by our parents, brothers, sisters and cousins left back home when we moved to the east coast. In their absence, friends became family. We treasured the associations and the memories. 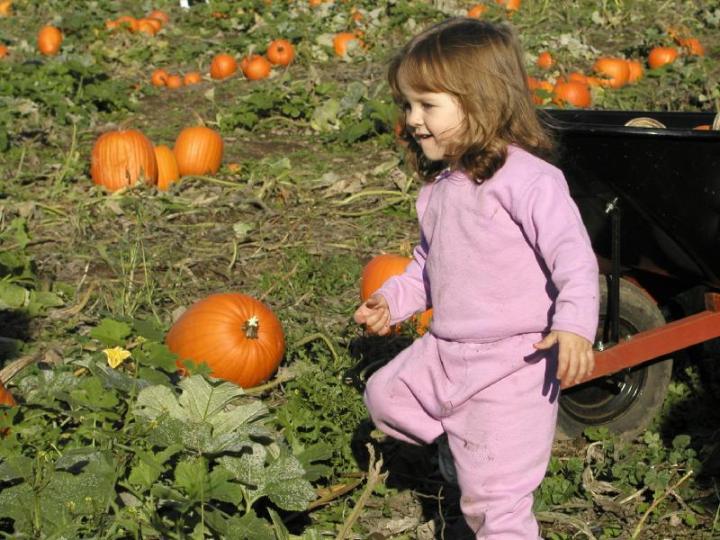 Kayla in the pumpkin patch.

Building a past is just as important as constructing a future. What you leave behind in the wake of life may, over time, turn into regrets or a blessing. The people you touch, the actions you take and the choices you make become the warp and the woof of your muscular and emotional fiber.

We shouldn’t just let life happen to us. If we’re being buffeted and battered by the winds of change or allowing others to manipulate or prod our “ship of sail,” we become victims of other people’s wants and desires instead of our own.

Building and constructing are positive activities that require planning and initiative. Similar to business endeavors, we build memories by consciously thinking of outcomes. How will this action or activity affect me and my family tomorrow, next month, a year from now?

Don’t kid yourself, words can kill, or at least wound. Once out of your mouth, they cannot be taken back and are seldom forgotten. They continue to hurt long after they’ve been said. Ugly or negative actions toward or against someone else, especially a family member, leaves scars that may last forever.

When you encourage and support independent behavior, you increase self confidence.  I tried to provide my children opportunities to choose for themselves whenever possible.

When selecting clothes, they were given two or three options, all of which were pre-approved by me. In being given a voice in what they wore, and in what we could afford as a family, they at least felt they had some say in the matter.

They chose their own pumpkins and Halloween costumes. They could choose to make their beds and go and play, or stay in until it was done. They could choose to clean their rooms or miss out on the fun later. Learning to choose and suffering the consequences of their actions provided opportunities for discipline and self-control. 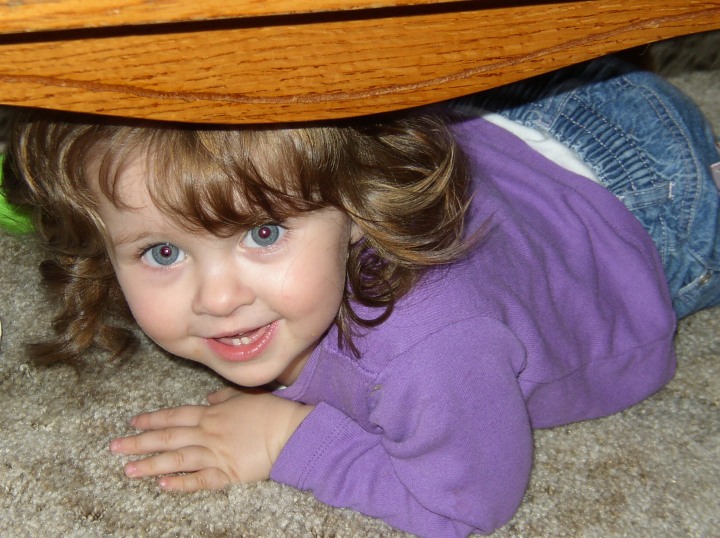 Kayla hiding beneath a coffee table.

Mom and dad always had the last word, but at least the children felt respected in their ability to contribute to family decisions. Harmony isn’t something that just happens. It must be planned. If one parent or the other is “scrappy” and negative, then the children will be, too. Happiness is catching. Giggles are contagious. Once the ripple starts it is hard to stop.

Negativity and complaining are also easily “caught.” They can spread like a wildfire and infect surrounding attitudes and feelings. These black moods are combustible and highly volatile. People fall under their power like dominoes.

A negative person’s aura can be felt the minute they walk in the door. Keep those enemies of calm at bay. Sometimes it’s as simple as filling a growling stomach or allowing someone a chance to be alone and unwind at the end of the day.

Katy fixing her bridal sash with help from a friend.

Keep your home as a sanctuary where people feel safe and loved. When you desecrate that hallowed space, there is only one place to turn – the streets. Build yours and your children’s tomorrows by creating a peaceful environment at home. In that way, there will be no regrets later to tear your family or your loved one’s apart.