I’m reading a book called “The Ludwig Conspiracy” by Oliver Potzsch dubbed as a “historical thriller.” This adventure takes place in Bavaria and Munich and brings back so many memories of when my first husband and I were frolicking over the Swiss Alps and through the magnificent Black Forest.

Ballroom where Wagner’s music was performed

I’m reminded of places like Oberammergau, where one could find cuckoo clocks, wooden plates with rosemaling similar to that in Norway, and fine wood carvings.

We toured the magnificent castles of Neuschwanstein and Linderhof where Wagner performed on stage and where ballroom dances took place in the great hall.

Our trip started in Bremen and was prompted by a conference for my husband’s employment. While he sat in meetings, I was able to tour the fascinating Schnoor Quarter with its narrow streets and colorful houses and shops that were restored and preserved from another era.

At night we dined in the Ratskeller and ate delicacies I’d never heard of before. We saw the famous “Bremen Town Musicians” bronze statue and the lovely harbor frequented by Scandinavians who vacation in this area. 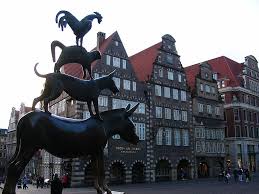 The Berlin wall was still up and we were able to see the contrast between the thriving, robust and buzzing city in the free West and the fearful, regressive, and guarded Berlin of the East.

We chose to eat soup and bread with the workers at lunch time, and I purchased some finds from a local hardware store where planters were still put together with wooden nails. I also bought my children some fantastic wooden toys and a large set of stacking dolls.

In Munich I was able to get some Hummel statues and see the famous Glockenspiel. Here we learned that the residents pronounced the name of their city “Munchen.” 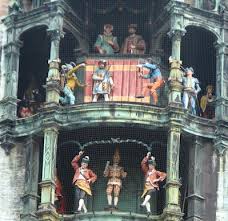 One of my first paintings was of a bridge laden with bright red geraniums with a green river flowing beneath it. I’ve forgotten the city’s name, but I can’t forget the colorful flowers hanging from windows and stoops. 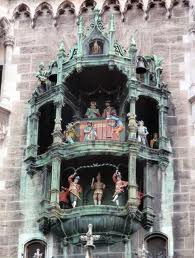 Each morning, the porches and streets are swept clean. Fall leaves are raked up and given as fodder to the cattle. Nothing goes to waste.

We were also able to dip down into Austria, but discovered that everything was closed on Sundays. We ended up looking into windows and wishing we were inside. We saw all the sights where Sound of Music was filmed such as the Mirabelle Garden and the church and graveyard where they escaped after their stage show. The theater is still going strong, but it, too, was closed.

On our way to Frankfurt and our flight home, we stopped in a small village called Rüdesheim am Rhein along the Rhein River. It was October Fest and the place was Rocking! We stayed overnight and got very little sleep. I will always remember how clean, green and beautiful Germany was.

Germany has become a favorite place to visit. Its marbled history has created a strong and independent people who are eager to show the world a different face. Since that first trip, I’ve read many books both historical and fictional about this wonderful and exciting place.

Someone asked me the other day what was on my “bucket list,” and I told them I didn’t have one. Reading Oliver Potzsch’s book about early Germany has made me want to return, just one more time!