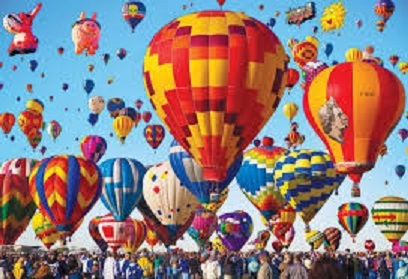 The last time I rode in a hot air balloon, I was in my twenties. I remember being surprised at how hot it was up there. Our pilot kept a constant watch on the fire and gas levels which filled the hollow balloon with hot air. The exhilarating feeling of gliding over the pasture land below was well worth the fee we paid for the thrill.

I’ve had a fascination with these colorful “envelopes” ever since. Every year in Missouri and many other states balloonists gather with their gondolas and designer aircraft to share their enthusiasm with other fans of the sport. When they all take off, it’s a breathtaking spectacle that is remarkable and unforgettable. 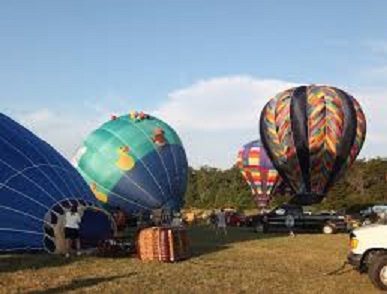 Recently there was a horrible disaster in Texas. A balloon carrying 16 people on an overcast day failed to see the overhead power lines they were heading for. The balloon caught fire and exploded killing all 16. Because of the wind and weather, hot air balloons can be unpredictable.

According to Wikipedia, the hot air balloon is the “oldest successful human-carrying flight technology. Are they safe? Today’s balloons have an envelope that is not sealed at the bottom, the envelope is generally made from nylon fabric and the inlet of the balloon (closest to the burner flame) is made from fire resistant material.

“Beginning in the mid-1970s, balloon envelopes have been made in all kinds of shapes, such as rocket ships and the shapes of various commercial products, though the traditional shape remains popular for most non-commercial, and many commercial, applications.

Shortly after 9/11 I attended a hot air balloon show at Minneapolis/St. Paul airport. All planes were still grounded, including these magnificent aircraft. We walked from one gondola to another greeting the owners and admiring their colorful envelopes that were inflated and ready to fly. Sadly not one balloon was able to launch that day.

In the interim, we were fortunate enough to witness a marriage ceremony of two balloonists. They had met during a balloon conclave, fell in love, and wanted to share their wedding day with the friends who enjoyed the sport as much as they did.