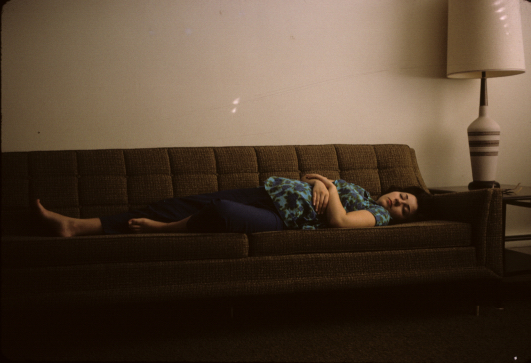 (Yes, here I am in all my exhausted and pregnant glory, expecting our 5th child)

Our first home had a cement floor that we covered with throw rugs to keep our feet from freezing in the winter. The kitchen was overlaid with grungy black tiles thickly coated with layers of old yellow wax. I knew it had to come off, but how?

Finally I tackled it! Not with a scrubbing-brush or gallons of product that our budget couldn’t afford, but with a razor blade. I knew I had to be gentle or scratch the tiles. I figured if I could scrape five or more squares a day while my two toddlers were napping, I could get it done in a few months. Speed was not the objective. A shiny black floor was.

By sticking to my guns, I beat my goal and had it done in a month. I reasoned that if I could do this with every dream and every challenge, just think what I could accomplish! Every time I walked into that room and saw the deep sheen on the floor, cooking for my family and taking care of my babes did not seem so daunting. I needed this kind of optimism because we ended up with six kids.

After going three weeks over my due date, the first one brought 24 hours of excruciating labor. The doctor debated a cesarean section, but kept saying “let’s wait a little longer;” until finally her little head crowned and she was born.

The second child, a boy, was born 14 months later. My water broke at home and we rushed to the hospital. My husband was still registering me when he was born. “Wow, this birth thingie is going to be a snap from here on,” I thought.

It wasn’t. Four years later, during fireworks on July 5th , I went into labor with my third child, a boy. I was also three weeks overdue with this one. After another long labor, he weighed in at 10 pounds.

The fourth child introduced me to stress diabetes followed by two more ten pound babies and difficult deliveries. But once the births were over, and I held those precious humans-in-miniature and nursed them joyfully, the pain and suffering was quickly forgotten.

“Nothing worth having was ever achieved without effort.” Most of us have heard that Teddy Roosevelt quote many times. We’ve experienced it when we finally get that perfect job, or find the right mate after we’ve gone through several “duds.”

There are struggles and growing pains in every new thing we try. We think we will never find satisfaction or success. But if we’re patient, we may get to see completion. Then we realize we were watching the unfolding miracle happen before our very eyes.

The first time you must  punish your child for disobeying the rules or for going against your family values, you probably experienced pain; perhaps even guilt or shame. Not that the punishment didn’t fit the crime, but that you had to do it at all.

Paula, my 5th child (Aunt Jean’s paintings behind; and a baby quilt I made.

One of my daughter’s was forever breaking the rules. The frightful thing was that she accepted the “grounding” or the scolding willingly knowing that she deserved it. But that consequence didn’t stop her from disobeying the next time. Even as a teenager, if she were grounded for a week or even a month, it didn’t seem to make any difference. She just went out when she was free and again disobeyed the curfew. I didn’t know how to deal with her effectively.

Her father was absent most of the time. When I’d explain the situation to him, he seemed not to hear. His response was nothing as he left for work. My daughter had to experience the results of her actions again and again. Later in life, long after there was no one there to reprimand her except herself, she went through some hard times before the “light came on” and she altered her choices and behavior because it was healthier and safer.

We sometimes see ourselves in our children. We try to hold them back through warnings or discipline so they won’t have to experience the pain that we did. They could listen to us if they would. They could be obedient and save themselves a truckload of you-know-what, but they don’t. They go blindly forward in spite of our words and our anguish.

Here’s all five of them on  the mountain with Mom, ready to throw rocks over the cliff. (# 6 wasn’t here yet.)

I always believed that if my children knew how deeply I loved them everything would turn out all right, but sometimes it doesn’t.

Accepting your child as he or she is with all their flaws and imperfections is the key to their own self-acceptance and outlook as adults. You need to continue loving them even though their life choices may not have been your own.

It may be difficult. You may not necessarily approve of their actions or behavior. You love them anyway. God does this for us as parents and we’re far from perfect. He loves His children unconditionally. Can we do any less for our own? 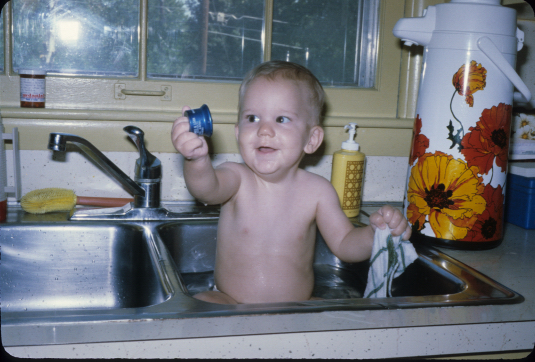 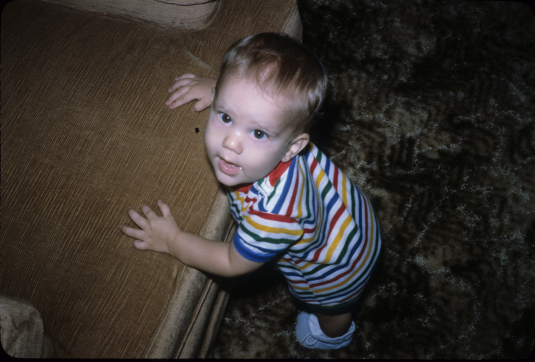 #6 now a toddler, dressed up for church.

Scene from “Call the Midwife” PBS

The birth of a new baby always draws people together; the anticipation, the anxiety, the hope and excitement for the future are mirrored on each face.

Time inches forward. The waiting is stressful. We traveled from Fort Myers to Minnesota to welcome a new great grandson into the family.

Yesterday I walked back and forth with the mother-to-be and her mother hoping to shake this stubborn little fruit from the tree. Overripe and bulging, Katie hoped that the bouncing and jostling in the crowd would encourage her son’s birth. And she was right. At 2:30 a.m. that morning, the contractions began. But the long labor and final delivery went on for another 24 hours.

This ordeal brings back many memories, not only of my first daughter’s birth after 24 hours of hard labor, but of five more who came into the world on their own terms. Their personalities were imprinted on their souls from the beginning. We saw glimmers of their uniqueness even before they were born and forever after. No two babies are ever the same. Each is a priceless jewel that opens like a bud in witness to a miracle.

Characters from “Call the Midwife”

The show’s timeline is sometime after the Blitz in London and moves into the 1950s. Midwife is tender, revealing, and oftentimes traumatic as seemingly live births occur in the seamiest side of London’s East End. The characters warm your heart as you watch their personal struggles. The Midwives become the only strength and power many of these women and their families will ever know. 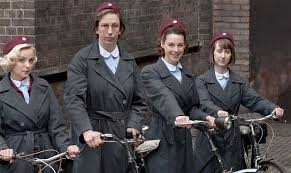 Wondering how my husband felt about watching this show, I turned to him and saw tears glistening in his eyes. “Isn’t that a beautiful sight?” I commented. New life really is beautiful and most parents will cherish the birthing moment forever even as the pain and anxiety fade.

We are heading out to Seattle, Washington, to see my oldest daughter and her children, and grandchildren. I haven’t been out there in a long time, and our reunion is past due. I’ll keep you posted with photos of the new baby and stories of our trip. 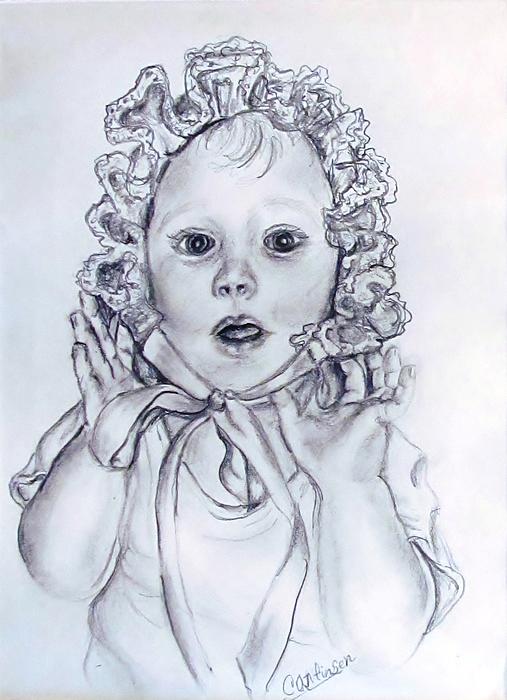 “Does this hat make me look fat?”

When a group of mothers get together, the audible sound bytes will likely include chatter about the perils of giving birth and raising children. Center stage is the person who had the longest labor and delivery or whose birth canal sustained the most damage.

Of course, I’m long past that stage of my life, but the memories linger on. Today I reminisce watching “Call the Midwife: a Memoir of Birth, Joy, and Hard Times” on PBS. Based on the memoirs of Jennifer Worth a nurse and midwife in post war London in the 1950s, the show is a delightful stroll down memory lane.

Even husbands are in awe watching live births actually happen on screen. Eyes tear up as each infant takes in its first breath and wails that familiar newborn cry. Mothers forget their pain. Midwives are reinvigorated with purpose as the intertwined plot reveals the seedier side of life in London’s urban squalor.

Almost as popular as Downton Abbey, another PBS favorite, viewers discuss Midwife’s characters and plots via email, texting and “face time.” Chummy is down to earth and lovable and has become a symbol of women’s changing role in society and her need for independence and fulfillment. Jenny, the main character, mirrors our own hopes, dreams and aspirations.

Watching people cope with poverty, ignorance, domestic violence, lack of birth control and disease is heart wrenching. When someone in these circumstances makes a wise choice or demonstrates not only their humanity, but an unrestrained compassion for others we are lifted in the process.

In the midst of filth and degradation, these mothers courageously bring life into the world with dignity. They embrace life and cling to hope. Viewers are inspired and ashamed at the same time. The characters have little, but they give all they have. Their courage and defiance in the face of tragedy make us, who take so many things for granted, ashamed. We are filled with a new sense of gratitude for our own abundance and ease.

Historical dramas remind us of where we’ve been and to whom we owe gratitude: the trail blazers, the researchers, the movers and the shakers of the past. We are enriched by their struggles and made aware of the sacrifices that were made on our behalf. Our own past and the trials and challenges that we faced may also be inspiration for those who come after.

“No man is an island,” penned John Donne. We are all connected and we influence every person who comes into our life whether with a simple smile or a helping hand when it is needed.

No Man Is An Island

No man is an island,
Entire of itself,
Every man is a piece of the continent,
A part of the main.
If a clod be washed away by the sea,
Europe is the less.
As well as if a promontory were.
As well as if a manor of thy friend’s
Or of thine own were:
Any man’s death diminishes me,
Because I am involved in mankind,
And therefore never send to know for whom the bell tolls;
It tolls for thee.