There are more lightening deaths and injuries per year in Florida than anywhere else. That’s why when the thunder rolls and the sky darkens, you’ll find me running for cover. If we’re out walking, we scurry home. If we’re in the car, we find a temporary stopping place. I believe Dorothy literally when she said in the Wizard of Oz “There’s no place like home.”

But unlike the girl from Kansas, I don’t have any magic shoes to click and whisk me home. What I do have is common sense. Most year-round residents do. It’s the poor tourists that are hit by lightening more than any other group. Either they’re not familiar with our warning sirens or they don’t take them seriously.

The most recent lightning mishap occurred on Fort Myer’s Beach on a cloudy day. In this case, it was Local residents not tourists, a group of family and friends, who were seemingly unaware of the weather’s potential danger. Instead of heading for cover, they continued to play on the beach. Out of the blue, a flame thrower struck one man in the head killing him instantly, and another lightning rod hit a young man, who ended up in ICU in a comatose state; his girlfriend standing nearby was burned. The prognosis for him was not good. The wagging tongues whispered what everyone feared: death or brain damage; quite possibly paralysis. The girlfriend was listed in fair condition.

Miraculously, the boyfriend eventually walked out of the hospital wiser but saddened by the death of their older male friend.

According to Naples Daily News, “Earth Networks’ Total Lighting Network detected 4,556 lightning flashes and 715 cloud-to-ground strikes within a 10 mile radius of Fort Myers Beach on Tuesday, between 11 a.m. and 3:15 p.m.

“Within 50 miles of the Fort Myers beach, there were 16,622 flashes, with 2,372 cloud-to-ground strikes. “The first lightning strike within 10 miles of Fort Myers Beach happened at 12:11 p.m., just less than two hours before the deadly strike.

“Another strong storm cell, featuring a significant amount of lightning, developed just north of Fort Myers Beach about 69 minutes before the fatal strike.” 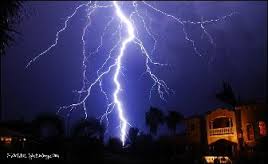 If you’ve never witnessed a Florida lightning bolt spread its fiery veins across the sky and throw its jagged spear of flames to the earth you’re in for a surprise. It gives new meaning to the expression: “Don’t mess with Mother Nature.”

Remember the old movies during the fifties when the announcer said: “Duck and Cover.” These sentiments were repeated in every classroom across the country and in short film clips at local theaters. Ironically, these drills were performed to protect citizens from threat of nuclear attack or falling bombs. In those days, people headed underground for homemade bomb shelters or to public places that were designated safe.

Perhaps we should resume these safety drills considering the number of natural disasters that occur each year. We should be prepared and protected from tornadoes, hurricanes, fires and floods; and in today’s modern world from terrorist attacks, street riots and sniper fire. We live in a precarious world with an environment that is powerful and unpredictable.

In the case of lightening, you don’t want to be the only target standing in an open field, golf course, beach or street; a human tree exposed and vulnerable. Perhaps when the skies threaten, we should all duck and cover and seek protection.  When the thunder sounds, those are your marching orders to head for safety!

I’m not recommending living a reclusive life tucked away from all danger. But I am saying we must know the risks and how to protect ourselves. Living smart means keeping your eyes and ears opened and staying attuned to the warning signs posted on the ground, in the airwaves, and on the news.